Dorian Weakens to a Category 2 Storm, but is ‘Growing in Size’

The hurricane has lost strength since it came ashore on the Abaco Islands over the weekend. Dorian is a little more than 100 miles off the shore of Fort Pierce, Florida, and has maximum sustained winds of 110 miles per hour. 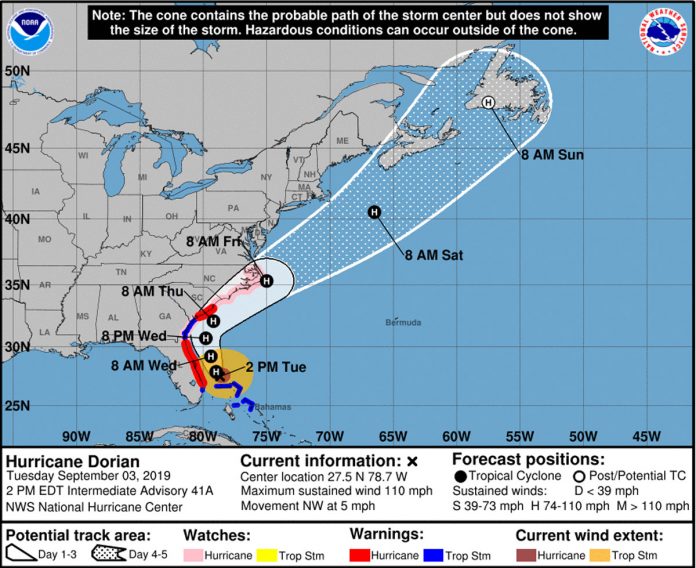 Hurricane Dorian has been downgraded to a Category 2 after spending more than a day thrashing Grand Bahama Island. The core of the storm is finally “moving away from Grand Bahama Island,” according to the latest advisory from the National Hurricane Center. But the storm still poses a threat of “dangerous winds and life-threatening storm surge … through this evening.”

While the NHC also says the once major hurricane has lost strength since it came ashore on the Abaco Islands over the weekend, an earlier advisory says Dorian is growing in size.

NHC adds the storm is picking up speed, ever so slightly, now moving toward the northwest at about 5 miles per hour “and a slightly faster motion” is expected later today and tonight, with a turn north forecast by Wednesday evening.

Dorian is a little more than 100 miles off the shore of Fort Pierce, Florida, and has maximum sustained winds of 110 miles per hour, according the NHC.

The storm spent most of Monday and into the morning Tuesday essentially stalled over the Bahamas, relentlessly pounding the islands with high winds and catastrophic flooding.

As Hurricane Dorian begins to slowly accelerate towards the U.S. mainland, effects will likely be felt in parts of Florida this evening. Georgia, the Carolinas, and Virginia could feel the effects of Dorian in the coming days.

Much of Florida’s Atlantic coast from Jupiter Inlet near West Palm Beach to as far north to Ponte Vedra Beach near Jacksonville are under a hurricane warning, according to the latest advisory.

South Carolina’s Gov. Henry McMaster told reporters Tuesday, all of his state’s coastline is “either under a hurricane watch or a hurricane warning.”

“South Carolina is still in the path of what is a very destructive and deadly storm,” McMaster said.

He warned the storm could produce “dramatic flooding in the low country,” especially in the port city of Charleston. The state’s Edisto Beach north to the South Santee River are under a hurricane warning, according the NHC.

NHC says Dorian will move “very near” the Georgia and South Carolina coasts Wednesday night “and near or over” North Carolina later in the week.

A hurricane watch is in effect for North Carolina’s coast up to Duck and including Albemarle and Pamlico Sounds.

On Tuesday North Carolina’s Republican Gov. Roy Cooper issued a mandatory evacuation order for all of the states islands, stating that those in Dorian’s path “will be exposed to substantial risk of injury or death.”

Robert Koehler, 60, was arrested over the weekend and was being held without bond.
See more
Entertainment

On the eve of the Lunar New Year, transportation was shut down Friday in at least eight cities.
See more
- Advertisement -

The quake could be felt strongly in Santiago, the largest city in eastern Cuba.
See more

Now immigration officials can deny green cards to legal immigrants over their use of public benefits.
See more

Bryant’s Chopper Crashed in Fog that Grounded Other Aircraft

House is Given Tape of Trump Calling for Ambassador’s Ouster

An associate of Rudy Giuliani has provided congressional investigators with the recording.
See more
- Advertisement -
216
SHARES
Share this!Tweet it!