As the first daughter crafts a political career from her West Wing office, her brand is flourishing, despite boycotts and several stores limiting her merchandise. U.S. imports, almost all of them from China, shot up an estimated 166 percent last year, while sales hit record levels in 2017. - Reporting ERIKA KINETZ and ANNE D'INNOCENZIO 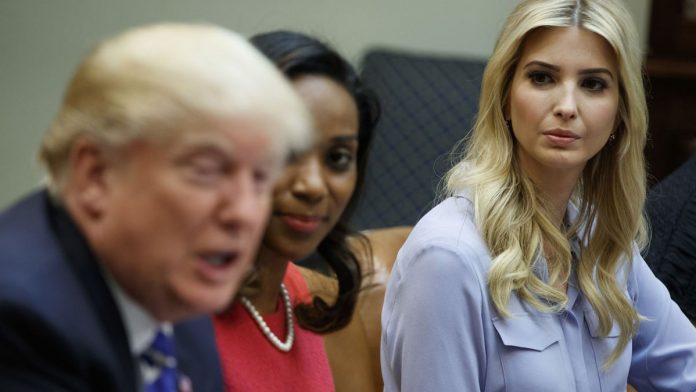 Super Bowl 54: a Deserving Clash of the Best Two Teams

The Kansas City Chiefs will meet the San Francisco 49ers in the Super Bowl on Feb. 2 in Miami.
See more

This time around looks to be a “guarantee" for Broadway Joe.
See more

On April 6, Ivanka Trump’s company won provisional approval from the Chinese government for three new trademarks, giving it monopoly rights to sell Ivanka brand jewelry, bags and spa services in the world’s second-largest economy. That night, the first daughter and her husband, Jared Kushner, sat next to the president of China and his wife for a steak and Dover sole dinner at Mar-a-Lago.

The scenario underscores how difficult it is for Trump, who has tried to distance herself from the brand that bears her name, to separate business from politics in her new position at the White House.

As the first daughter crafts a political career from her West Wing office, her brand is flourishing, despite boycotts and several stores limiting her merchandise. U.S. imports, almost all of them from China, shot up an estimated 166 percent last year, while sales hit record levels in 2017. The brand, which Trump still owns, says distribution is growing. It has launched new activewear and affordable jewelry lines and is working to expand its global intellectual property footprint. In addition to winning the approvals from China, Ivanka Trump Marks LLC applied for at least nine new trademarks in the Philippines, Puerto Rico, Canada and the U.S. after the election.

The commercial currents of the Trump White House are unprecedented in modern American politics, ethics lawyers say. They have created an unfamiliar landscape riven with ethical pitfalls, and forced consumers and retailers to wrestle with the unlikely passions now inspired by Ivanka Trump’s mid-market collection of ruffled blouses, shifts and wedges.

Using the prestige of government service to build a brand is not illegal.

But criminal conflict of interest law prohibits federal officials, like Trump and her husband, from participating in government matters that could impact their own financial interest or that of their spouse. Some argue that the more her business broadens its scope, the more it threatens to encroach on the ability of two trusted advisers to deliver credible counsel to the president on core issues like trade, intellectual property, and the value of the Chinese currency.

“Put the business on hold and stop trying to get trademarks while you’re in government,” advised Richard Painter, who served as chief White House ethics lawyer under George W. Bush.

To address ethical concerns, Trump has shifted the brand’s assets to a family-run trust valued at more than $50 million and pledged to recuse herself from issues that present conflicts.

“Ivanka will not weigh in on business strategy, marketing issues, or the commercial terms of agreements,” her attorney, Jamie Gorelick, said in a statement. “She has retained authority to direct the trustees to terminate agreements that she determines create a conflict of interest or the appearance of one.”

In a recent interview with CBS News, Trump argued that her business would be doing even better if she hadn’t moved to Washington and placed restrictions on her team to ensure that “any growth is done with extreme caution.”

China, however, remains a nagging concern. “Ivanka has so many China ties and conflicts, yet she and Jared appear deeply involved in China contacts and policy. I would never have allowed it,” said Norman Eisen, who served as chief White House ethics lawyer under Barack Obama. “For their own sake, and the country’s, Ivanka and Jared should consider stepping away from China matters.”

Instead, the first daughter and her husband have emerged as prominent interlocutors with China, where they have both had significant business ties. Last year, Kushner pursued hundreds of millions of dollars in real estate investments from Anbang Insurance Group, a financial conglomerate with close ties to the Chinese state. After media reports about the deal, talks were called off.

Publicly, Ivanka has taken a gracious, charming approach toward Beijing. During the Mar-a-Lago meetings, her daughter, 5-year-old Arabella stood in a gilded room and sang a traditional Chinese song, in Mandarin, for China’s president, Xi Jinping. The video, which was lavishly praised by Chinese state media, played over 2.2 million times on China’s popular news portal qq.com.

The week of the summit, 3.4 tons of Ivanka Trump handbags, wallets and blouses arrived in the U.S. from Hong Kong and Shanghai. U.S. imports of her merchandise grew an estimated 40 percent in the first quarter of this year, according to Panjiva Inc., which maintains and analyzes global shipping records.

Painter, the former Bush administration lawyer, recommended full recusal from issues related to trade with China. That is likely to be difficult because trade is so deeply embedded in the US-China relationship and has been linked with other matters, like North Korea.

“The danger is that with any discussion with the Chinese, one party or the other may try to bring up trade,” he said. “That’s a slippery slope that may require her or Jared to step out of the room.”

Gorelick, Ivanka Trump’s attorney, said that Ivanka and her husband would steer clear of specific areas that could impact her business, or be seen as conflicts of interest, but are under no legal obligation to step back from huge swaths of policy, like trade with China.

Under the rules, Trump would recuse herself from conversations about duties on clothing imported from China, Gorelick said, but not broad foreign policy.

“In between, you have to assess it case-by-case,” she said.

Trademarks can be signs of corporate ambition, though many countries – such as China, where trademark squatting is rampant – also allow for defensive filings to prevent copycats from using a brand.

Trademarks pose ethical, and possibly legal, implications for government employees because they are granted by foreign states and confer the monopoly right to sell branded product in a particular country – an entitlement that can be enormously valuable. Intellectual property lawyers say trademarks are also a crucial prerequisite for cutting licensing deals, which form the basis of both Ivanka and Donald Trump’s global business strategy.

Today, Ivanka Trump Marks LLC has 16 registered trademarks in China and 32 pending applications, along with a total of four marks granted preliminary approval since the inauguration, according to China’s Trademark Office. Altogether, they cover a wide range of goods and services, including cosmetics, jewelry, leather handbags, luggage, clothes, shoes, retail, spa and beauty services. There is no sign the recent approvals were particularly swift. China’s Trademark Office did not respond to a request for comment.

Globally, the company has more than 180 pending and registered trademarks in countries including Canada, India, Japan, Israel, Mexico, Turkey, Saudi Arabia, as well as the U.S. and Europe, public records show. In December, the company applied for five trademarks, covering handbags and wallets in Puerto Rico, and lingerie and other clothes in the U.S. After the inauguration, the company filed four more applications, for branded clothing and shoes in the Philippines, and perfume and other items in Canada.

Trump did not sign off on the new trademark applications, her brand said in a statement, adding that they are “not necessarily an indication that the brand is planning to launch a category or a store in a specific territory.”

Whatever the future plans, right now sales are growing – helped, some argue, by the glow of Ivanka Trump’s political rise.

The G-III Apparel Group Ltd., which makes Ivanka Trump clothes, said net sales for the collection increased by $17.9 million during the year that ended Jan. 31.

The brand itself claims revenues rose 21 percent last year, with early February seeing some of the “best performance ever,” according to a statement by Abigail Klem, president of the Ivanka Trump brand. Because it is privately held, the brand does not have to declare its earnings or where revenues come from. The actual corporate structure of Trump’s retail business remains opaque. Kushner’s financial disclosure form lists two dozen corporate entities that appear directly related to his wife’s brand. Trump herself has yet to file a disclosure.

Data from Lyst, a massive fashion e-commerce platform, indicates some of this growth coincided with specific political events.

The number of Ivanka Trump items sold through Lyst was 46 percent higher the month her father was elected president than in November 2015. Sales spiked 771 percent in February over the same month last year, after White House counselor Kellyanne Conway exhorted Fox viewers to “Go buy Ivanka’s stuff.” Conway was later reprimanded. The bounce appears somewhat sustained. March sales on Lyst were up 262 percent over the same period last year.

“You can’t separate Ivanka from her role in life and from her business,” said Allen Adamson, founder of BrandSimpleConsulting. “Her celebrity status is now not only being fueled by her wealth and her family connection, but by her huge role in the White House. All that buzz is hardwired to her products.” That, he added, is a competitive advantage other brands just can’t match – though it does come with risk.

Things could easily cut the other way for the first daughter. Ashley King, 28 of Calabasas, California, bought Ivanka Trump black flats and a cardigan several years ago. But King, who voted for Hillary Clinton, said she believes Trump’s role in the White House represents a conflict of interest.

“This is bothering me more and more,” she said. As for the Ivanka Trump items in her closet, she said, “I will be donating them.”

Ivanka’s Business Prospers as Politics Mixes with Business. The scenario underscores how difficult it is for Trump to separate business from politics.

In the spot that will run through Super Bowl Sunday, highlights the 2015 shooting death of Boldin's cousin Corey Jones.
See more
- Advertisement -

As a presidential election looms this fall, divisions rankle, according to recent opinion polls.
See more

Trump Thanks Farmers for Backing him Through China Trade War

Trump said he has strong support among farmers following his signing of a preliminary trade deal with China.
See more

The lawsuit seeks to confiscate hundreds of millions of dollars from the estate in Virgin Islands.
See more

The Europe Investment Plan will be funded by the EU budget and the private sector.
See more
- Advertisement -
116
SHARES
Share this!Tweet it!