A new tribute album to Neil that has been years is the making with some top Florida and international names was released with a concert and film screening on August 12 at Luna Star Café in North Miami. 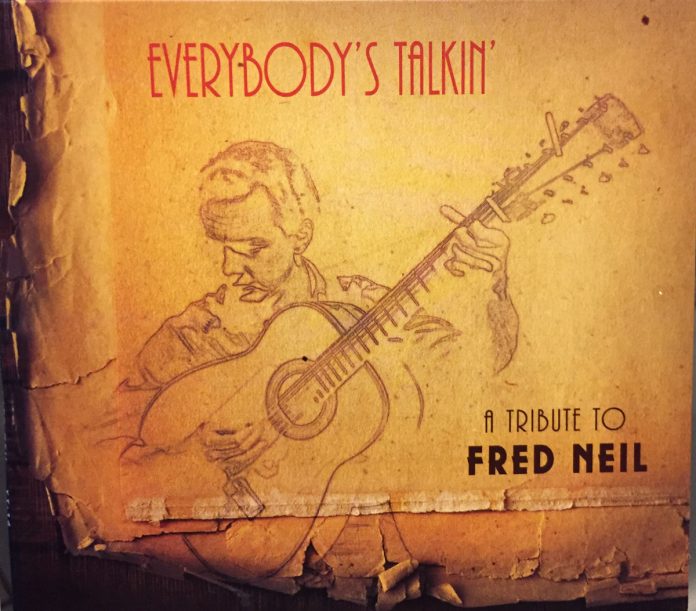 A hit songwriter who turned his back on the music business to protect dolphins, Fred Neil is one of the more unusual, revered figures in the music world. He made his name in the 1960s in Greenwich Village and wrote the hit song “Everybody’s Talkin’At Me” for the film Midnight Cowboy and performed with Bob Dylan in Greenwich Village clubs. But the dark urban noise and crowds didn’t suit his clothes, so he packed off for Coconut Grove where he played his guitar for Flipper and his sea mammal buddies.

A new tribute album to Neil that has been years is the making with some top Florida and international names will be released through Amazon on Friday August 17th.

In an article for Mojo Magazine, writer Ben Edmonds said “Fred is remembered as a singer blessed with an impossibly resonant baritone without equal in music, the writer of songs (Everybody’s Talkin’, The Dolphins, Candy Man, and The Other Side Of This Life) which will live as long as music itself. He is remembered as a mesmerizing but reluctant performer who reacted to the possibility of success with horror.”

Fred was born in 1936 and raised in Treasure Island near St. Petersburg, Florida. He moved to New York City in the mid-fifties. He honed his craft and made his mark in Greenwich Village then moved to Coconut Grove in 1970. He helped start the Dolphin Project along with Stephen Stills, and was “searching for the dolphins in the sea” the rest of his life. He turned down invites to perform on the Johnny Cash Show, the Tonight Show, a tour with Harry Belafonte, and even Woodstock. Fred’s last official public appearance took place in April of 1977 with the Rolling Coconut Revue, a coalition of musicians and environmentalists who decided to take their crusade for whale and dolphin awareness all the way to Tokyo.

In his sole published interview, Neil said” The kids today are more hip than ever and they want to hear some honest songs for a change. For example – and this is not a put-down on New York – the 13-14 year-old kids who come down to the Village see the winos passed out in the hallways. It’s not something they’ll go home and tell their mothers about, but they see it and they know these conditions exist. Folk music deals with stark realities like this. It’s saying something that the kids know about. You can’t kid the kids anymore. They know –and they know that they know. They don’t want all these wars and hassles and uproar all over the world. They know their parents have made a lot of mistakes and they want to see some peace for a change. Maybe when they grow up, the same thing will happen –who knows? But at least they’re trying more than any other generation. They’re tired of all the baloney and they’re saying just that. Much of this is responsible for the new interest in folk music. The lyrics are saying something. I still don’t know exactly where I’m going myself. I’m following the music, trying to write it as I see it, I’ll even say that. Someone once said that in “Other Side Of This Life” I got away with saying “Would you like to know a secret… I don’t know what the heck I’m doing” But at least I wasn’t copping out.”
When Fred hit Florida he hooked up with his friend Ric O’Barry.

“Fred started coming around to the Seaquarium where I was training dolphins for the Flipper TV series,” O’Barry says. “He was interested in dolphins and diving. At that time, I had five dolphins to care for. Whenever I had to go to the Bahamas to do the underwater filming, I would leave Fred babysitting some of the dolphins that I left behind. Fred would all spend time with the dolphins while I was gone. Fred had the patience of a saint, which made him the perfect dolphin babysitter. I remember watching Fred with his head under the water with bubbles coming out all around, trying to sing to the dolphins underwater. He would come by all the time and would bring his friends to play music for the dolphins. I remember Joni Mitchell, Rambling Jack, even LSD guru Timothy Leary and several other far out people. I was always getting in trouble because of this This was the early sixties, and long hair was starting, and people were wondering what all these long hairs were doing, tripping around the grounds. Felix Papplardi, Cass Elliot, Denny Doherty, from the Mamas and the Papas, David Crosby, all these people were coming around with Fred to hanging out and playing music to the dolphins. Those were great times. I knew Fred more as a diver and someone who was interested in dolphins than a musician. He seemed more interested in what I was doing than in what he himself was doing at the time.”

The producer of the tribute CD is Jim Wurster, a longtime South Florida musician, whose interest in Neil goes back decades.

“Actually, it goes back to 1974 when I was in college,” Wurster says. “A good friend of mine, Angelo Resciniti, was a journalism major at UM and wrote music columns for Miami’s underground paper, The Daily Planet. Late one afternoon, he gave me a call and told me that there was a word-of-mouth concert with Eric Andersen and the Band’s Rick Danko taking place that evening at the Coconut Grove Playhouse. I had never been to the Grove before, so he gave me directions and I headed down that night to see the show. When I hit Main Highway in the Grove, I was spellbound. Everything was so surreal. It was like that scene in the Wizard of Oz when it went from black and white to color. There were people playing guitars and flutes from balconies and out on the street. Everybody seemed to be happy. There was joy in the air. Magic. It was as though they were in an elevated altered state. It was my first exposure to bohemianism and I felt connected. The marquee at the playhouse said Fred Neil and Friends. I had no idea who Fred Neil was at that time. Now, I had been to quite a few rock concerts before, but they never moved me like what I would see at the Playhouse that night. Besides Fred, Eric, and Rick, there also were performances by Jimmy Buffett, Vince Martin, and Bobby Ingram (three fellas that were unknown to me). I was mesmerized the entire evening. I had never been part of an audience that was so attentive and expressed such a sincere appreciation of the music. The event was a fundraiser for the Dolphin Project of which Fred was a co-founder along with Ric O’Barry. Ric gave a presentation in the middle of the show that was captivating. I had always had a love for dolphins and nature in general. And now dolphins, nature, and music had come together as one. Of all the artists who played that evening, Fred was the one who had the greatest impact on the audience and myself. There was something special about the man and his music. His deep baritone, the songs, and the way he played his 12-string. You could see that all of the other performers adored and admired this man. The reverence was profound.”

To produce the tribute CD Wurster says “I just started calling people. People who were somehow connected to Fred, especially those who had performed at the numerous Dolphin Project benefits. The response was more than I could have expected. These people had no idea who I was, but they all had a love for Fred and wanted to be part of the tribute. Prior to making the calls, I got to know Ric, Bobby Ingram, and Vince Martin and they were supportive of my plan. Their approval got me fired up. Unfortunately, Vince just passed away July 6. He had sent me a song early on. I’m deeply saddened that he never got a chance to hear the tribute. As far as I know, that may be the last recording that Vince ever made.”

Why does he think Neil stepped away from music to focus on the dolphins?

“Well, I have heard a lot of Fred stories from Ric, Bobby, and Vince. It seems that his love for dolphins was greater than his love for fame. He apparently was a very intelligent and sensitive man who did not enjoy the spotlight. He did not care for the music industry and all its politics. He was invited to play at the Band’s Last Waltz concert. He showed up backstage with his guitar and when he was told it was his time to take the stage, he wouldn’t do it. At the same time, he had a lot of charisma and apparently, from what I’ve been told, women adored him. Besides the CD and release party, we are working on a video for “The Dolphins” song that was recorded in Miami and releasing the single for Japan Dolphins Day which is September 1st.”

Wurster says that Neil is important because “Fred, or Freddie as his friends called him, was a great and influential singer-songwriter who inspired many well-known artists such as Stephen Stills, David Crosby, The Jefferson Airplane, Eric Andersen, Jerry Jeff Walker, Case Elliott, and John Sebastian. When Crosby, Stills, & Nash first got together they wanted to call themselves Sons of Neil, but Fred nixed the idea. He often gets tossed into the folk musician category, but he was much more than that. There’s elements of blues, jazz, and raga mixed in that creates a truly unique song style unlike anything that we’ve ever heard. He wrote one of the the most recorded songs in history, “Everybody’s Talkin’,” which was the theme song for Midnight Cowboy and won a Grammy Award for Harry Nilsson. Harry did a good job with that song, however, it doesn’t compare to Fred’s. His signature song is “The Dolphins,” written about The Grove, his love for a woman and his love for dolphins. This tribute is meant to celebrate and continue the legacies of Fred Neil……his music and his dedication to a sea mammal that may be more intelligent than us. Certainly, they are much more civil.”

Artists on the CD include Eric Andersen who said “I always trusted and felt Freddie was the big brother I never had, of all the Village people and songwriters, he was my favorite, the real deal. We connected.”

Robert Koehler, 60, was arrested over the weekend and was being held without bond.
See more
Entertainment

On the eve of the Lunar New Year, transportation was shut down Friday in at least eight cities.
See more
- Advertisement -

Nothing is the same, whether it’s how much television we consume; how and where we do it.
See more
- Advertisement -
189
SHARES
Share this!Tweet it!